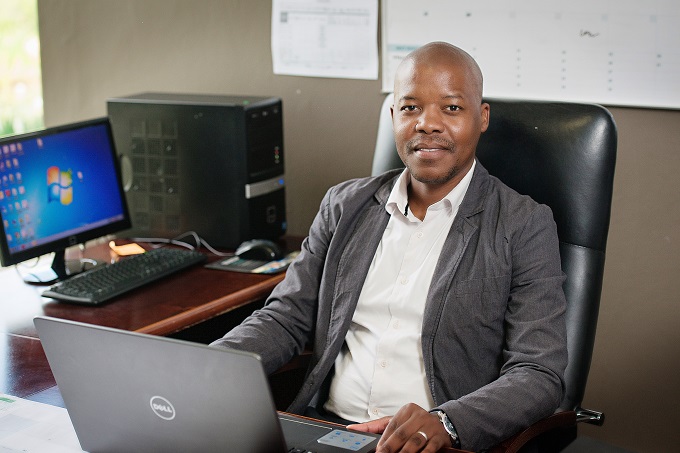 When it comes to all things I.T. related, Bongani Ndlozi is a boffin with big plans for the future. Before taking up the position as the Acting Assistant Director, Ndlozi began his tertiary education at the University of Johannesburg, where he studied towards a Bachelor of Science Degree majoring in I.T. and Geography.

He started as an intern at an I.T. company in 2007, and joined Majuba TVET College as an I.T. lecturer in 2008, “I taught end-user computing for a year,” he added. He soon took up an I.T. teaching project from 2009 to 2014 which aimed to train students in this field.

“These programmes included software and network engineering. We trained more than 500 students in the Amajuba District alone.”

Due to his vast knowledge in the field, Ndlozi was seconded for a training programme in terms of I.T. skills covering technical support, system development and end-user-computing. He later took a position of project officer which oversees all the I.T. programmes. He grabbed the bull by the horns when the post of Acting Assistant Director: Information Technology became vacant, and was successfully appointed in the position. In this position, Ndlozi said his personality suited the requirements, as he constantly strives to improve himself.

“I was thrown in the deep end, but I’m a person who loves challenges,” he smiled. One of the reasons Ndlozi highlighted as to why he took up the position was to change the state of the I.T. infrastructure at Majuba TVET College. “Being part of Majuba, I could identify that we are slowly slacking as compared to other corporate companies.”Ndlozi looks forward to taking the college into the Fourth Industrial Revolution and leading them into a digital age.

“I want to bring the college to a level where ICT becomes the enabler for the college to conduct its work effectively. One of the primary goals in I.T. is to save time by avoiding having to perform tasks manually.” He said each project had a target date and 2020 is the year Majuba TVET College will be on par with the rest of the corporate companies. “Even if another person takes over my role, the systems and structures implemented will lay a solid foundation for the decades to come and will still be used to build on for the future improvements,” he concluded.

A day in the life of Acting Deputy Principal: Corporate Services, Muzi Nts... Scroll to top